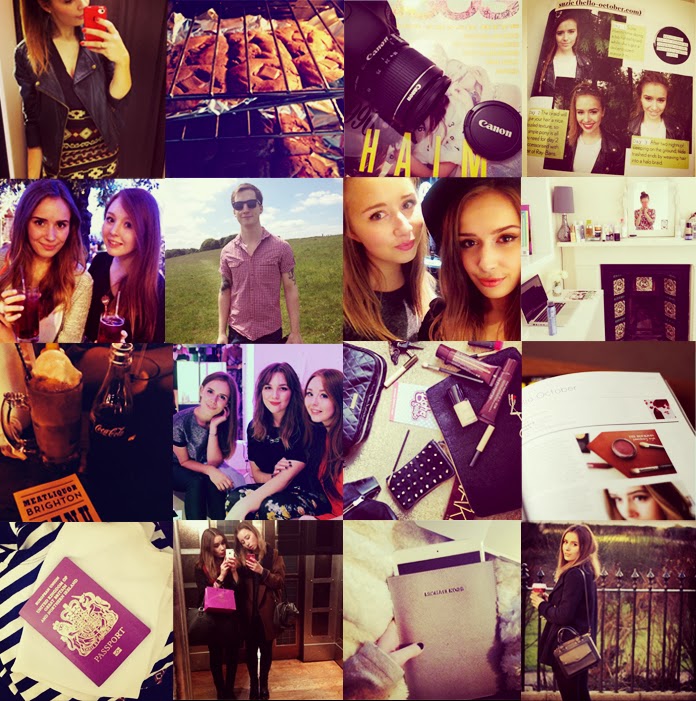 My goals for 2013 were to make healthier lifestyle choices and to do more. How did I do? Well, I definitely wouldn’t say my lifestyle is any healthier than it was 365 days ago. The discovery of coffee, ice cream cocktails less than 5 minutes away and home made cookies definitely didn’t help that. But I definitely did cram a lot in this year…

Travel
In March we continued our series of 21st birthday celebrations, starting with my best friends surprise/not so surprise (because I blabbed) trip to Centre Parcs. It was a blog free weekend for the most part, so photos are limited, aside from the shots for the May issue of Company Magazine. We were meant to be shooting a total of five festival hair styles, and what happened? Well it only snowed didn’t it? We had to clear a patch so that the photos wouldn’t look stupidly out of place in a May issue! We then went to Edinburgh for my boyfriends 21st – I kept this one a surprise this time – and we stayed in the most amazing hotel, and discovered a place that does the best burger i’ve ever had. I still dream about it occasionally. In August we returned to Centre Parcs, sans best friend but with family in tow for a long weekend. We were also meant to go to Paris for my birthday but because of the Company blog awards we decided not to go, just incase (wasn’t that a good call?). Luckily I still got to set my feet down on Parisian soil at the end of November for a shoot with Company Magazine and Bourjois. My past two trips there have definitely made me understand the Devil Wears Prada line about going to Paris and actually seeing Paris, having been twice for work. This year I WILL do the touristy thing.

Personal
The start of this year at home definitely fits the description of “being in limbo”, I spent 6 months driving backwards and forwards between houses and house sitting before ringing Josh up one day to announce I was going to view a flat. After his graduation he jumped fully onto the flat hunting bandwagon and found us a lovely little place that we now call home. But who knows where I might be writing this post from next year! We also celebrated our 7 year anniversary and spent our first Christmas together. But i’ll stop there or i’ll start getting soppy. This year I also met so many new friends through blogging, my closest being Luce. I now don’t go a day without texting her or sending her a snapchat (she’s seen some really beautiful faces via SC and still wants to be my friend for some reason), I’m also going to stop there with this one or i’ll start getting soppy again.

Blog/YouTube
This year Hello October went from being something I post on occasionally, to something I can’t quite wrap my head around. I’ve been in three magazines so far this year, with the fourth appearance popping up over the next week or so, and won “Best Established Beauty Blog” at the Cosmo Blog Awards – on my birthday – definitely one of those “is this real life?” moments. I’ve met bloggers and YouTubers who inspired me to start blogging and making videos and have made some of the best friends just through having a little corner of the internet to call my own. Crazy. It’s strange to think it all did a little snowball after I decided last Christmas that I wanted to try and post every day in January. There are so many more of you reading everyday now and its so mind blowing!

Thank you so much for reading, liking, subscribing, commenting and generally being awesome throughout 2013. It wouldn’t have been this amazing without any of you.