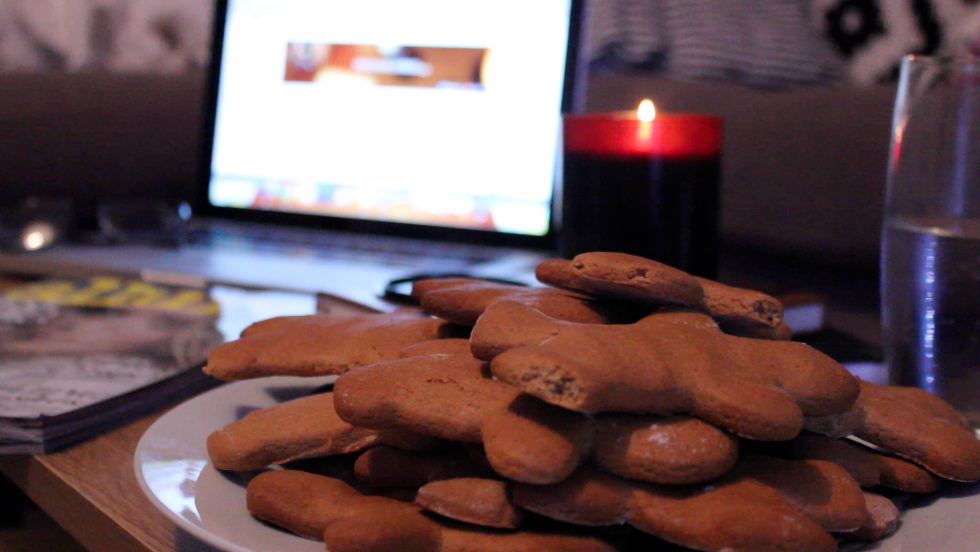 When my lovely friend Luce came to stay a few weeks back, one thing at the top of our to-do list was baking gingerbread. Turns out Luce is a fantastic little baker and I don’t think they would have been the same without her. We used the recipe from taste.com but altered it slightly as we didn’t fancy icing them.

Preheat your oven to 180°C. Brush 2 baking trays with melted butter to lightly grease (or use baking paper).

We used a fork (but you can use a wooden spoon or whisk – what ever you like) to beat the butter and sugar in a bowl and then added the golden syrup and egg yolk to the mixture. Next we stirred in the flour, ginger, mixed spice and bicarbonate of soda, before turning onto a floured surface and kneading until smooth. We then roll the dough out and cover with cling-film. The gingerbread men then go in the fridge for 30 minutes to rest. (Note: this is the opportune moment to lick the spoon.)

Once your dough is ready to come out, place it between 2 sheets of baking paper and roll out until about 4mm thick. Use a gingerbread man cutter to cut out your shapes. (You can repeat this process with any excess dough left over, or just eat the left over dough – it may be asking for food poisoning a little bit, so I can’t legally tell you to do this, but it does taste delicious). Place on trays about 3cm apart and bake in oven for 10 minutes or until brown. Once they’re done leave them on a rack to cool. Don’t do what we did and burn your tongues. It hurts.

Our video footage for the gingerbread baking vlog was fairly sketchy as the sun sets so early now, but I will be popping the best bits into a Christmassy video over the next few weeks. Let me know if you tried baking these, they really were delicious, and were far too good for sharing. My work colleagues only saw photos of our gingerbread extravaganza as not one crumb made it to the office. A post Christmas detox is definitely on the cards after the past few weeks…