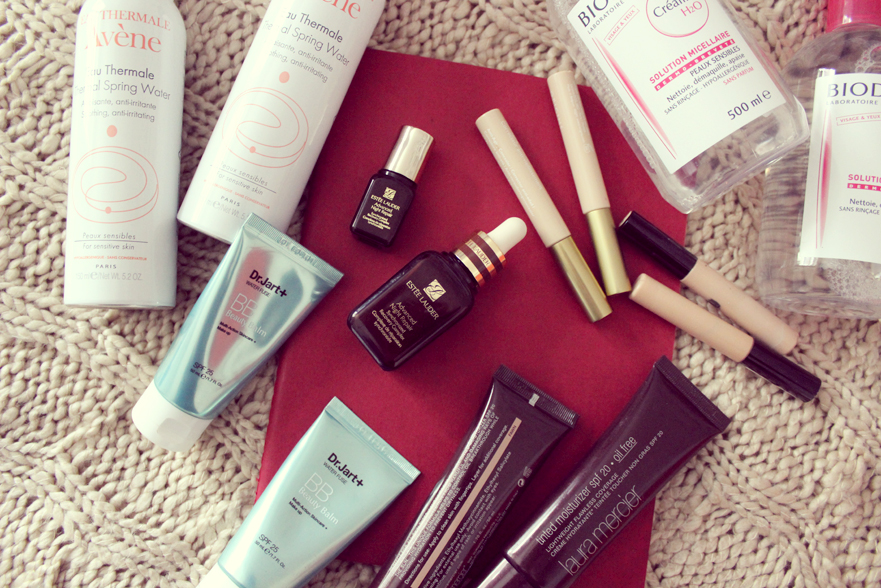 Any beauty fanatic will probably fess up to rarely purchasing something more than once, an onslaught of new products each month means you’re constantly trying out new things and no matter how much you love something – it just doesn’t make sense to have that extra moisturiser in the stash. But every so often you find yourself needing that concealer in a lighter shade or having to have that extra BB cream to keep at your boyfriends house. One in your handbag, one on your desk, before you know it you’re sprouting doubles (or triples) and even in some cases repurchasing two by two. I’ve rounded up my share of the doubles below and have deemed all of them completely necessary…

Dr Jart BB Cream: I purchased this back in September and Boots have been completely to blame for it’s early repurchase as they reduce this every so often to a meer £11, and so in the interest of my finances I just had to have two.

Larura Mercier Tinted Moisturiser: I wore this religiously last summer in the shade “Fawn” and after a good four months of being shoved to the back of the stash, I felt like cracking this out back in february –  bad idea, my tan had well and truly faded and I just looked like I belonged in a bad remake of charlie and the chocolate factory. So I took a walk to Space NK and Tinted Moisturiser #2 in “Bisque” was added to the stash alongside it’s big sis.

Collection Lasting Perfection Concealer: I’ve lost count of the amount of these I’ve repurchased, and ever since discovering it back in 2011, I’ve always had at least two on the go. One in shade 3 and one in 2. Standard.

Origins Plantscription Concealer: I own this in no less than THREE shades. You heard me, three. Shades one, two and three have been purchased over the past six months to keep my ever paling skin from going without this.

Bioderma: Because you just have to stock up don’t you? Unless you visit France regularly, you’ll be familiar with carrying multi packs of the stuff home with you. No, it doesn’t take your makeup off in one sweep like people people claim, but it is amazingly gentle and great for taking off heavy makeup before you cleanse.

Estee Lauder Advanced Night Repair: In the past year I’ve repurchased this twice and as of last month a tiny new travel addition has been added to the family. A free sample from spending too much money at Estee Lauder counter, this little one is amazing for travel as the opening is wide enough to refill once you’ve used it up.

Avene Thermal Water Spray: Now Boots are completely to blame for this one yet again, after coming across a two for £10 offer, but I’m completely okay with this as they suit my lazy girl morning cleanse just fine. I also use it post cleanse before drying my face to neutralise any nasties in our harsh southern water. Can you tell I’ve been sucked in by the most recent videos on Into The Gloss?

So no regrets on the doubles part, yet. I have yet to figure out how I’m going to justify this to the other half when we move in together later this summer – our flat may resemble something of a beauty Ark…

*Edit* – This is josh speaking, send halp, am currently drowning in moisturising creams and thermal sprays (literally a £5 bottle of water with a spray shoved in the top). Also, for some unknown reason I seem to be spending what might be my last minutes on this good earth in a room full of coupled animals. The lions have eaten the penguins and are now terribly sick. The elephants have made a disgraceful mess in the corner, which was unfortunately the last place I remember seeing the hamsters. They seemed to have suffered a worse fate than I. If this reaches someone, please tell my mum of my fate. She would want to know the truth.


My boyfriend ladies and gentlemen…