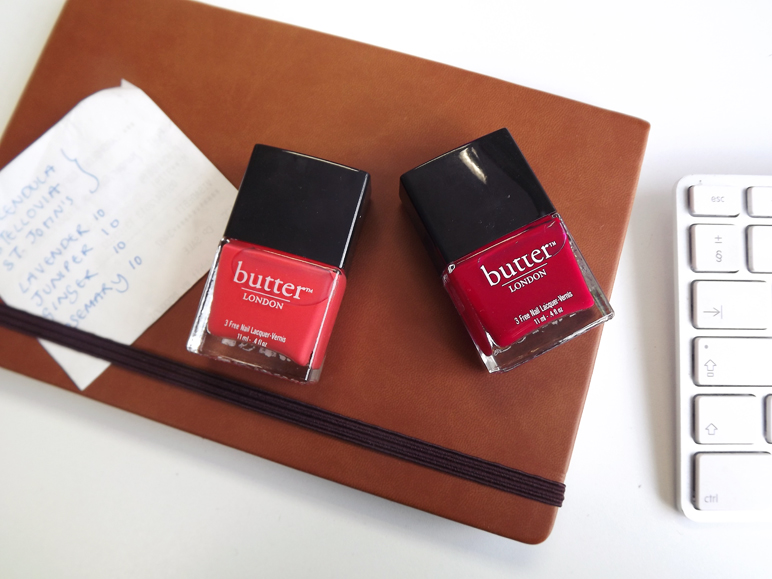 Butter London nail polishes are now available at boots and I’m not even going to pretends that I didn’t purchase them the day my cousin (who works in my local boots) let me know they were in store. I planned a slight detour before work and set to work Supermarket Sweep stylie. I almost left with five before doing the math, giving my wrist a good slap and cutting it down to two.

As a serious nail polish hoarder I found this little cull fairly difficult as there are very few colours I don’t own. However there are no dark reds (with a hint of pink) in the stash, nor bright orangey pinks. So “Come To Bed Red” and “Jaffa” left the store with me – both are gorgeous and despite their hang ups, look beautiful once applied. I’d never used anything from Butter London before but they rank fairly high in most peoples nail polish recommendations so I was excited to give them a go. On application I found the polishes a little more on the sheer side with the white of the nail still slightly visible and every so slightly streaky after two coats – three is the magic number and leaves me steak free, but who has time for that!?

In terms of longevity, I’ve used the Seche Vite topcoat (which I highly recommend) and they last for around 3 days before chipping. If you change your nail colour a lot then this won’t be an issue, but if you’re insanely lazy like moi then beware because these polishes require a little maintenance. Naturally this could just be down to the condition of my nails at the moment as my diet has been super shabby of late – but polishes like Baker Street by Nails Inc have stood the test of time, so I’ll leave that one up to you.

On reflection these are similar to OPI polishes – if you like them, you’ll like these. If you don’t then the Barry M Gelly’s have similar colours and a shine that won’t disappoint.

Butter London polishes are £12 each from selected Boots stores.